The most remote and beautiful landscapes Of Mexico!

Hello my name is Edward Born in Colombia living on Mexico and truly adventurous, I would like to introduce a little of the city ​​where I live, and to invite you to contact me, so yo can come to visit the beautiful places here, I do not ask for money for been a Guide for u guys like my profile says, I love meeting people from other parts of the world, and would be more than happy to be in charge of taking you to visit this beautiful city, and all its beautiful hidden paradise, as you know only someone local would know...

This is a little bit of what Monterrey Mexico Offers! 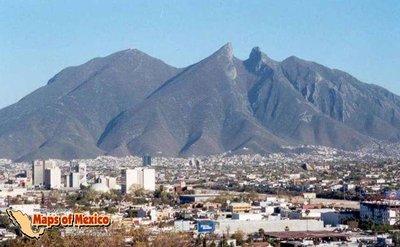 Monterrey isn’t traditionally thought of as a great tourist destination, but the city does have plenty to offer its visitors. The city is a sprawling metropolis that serves as Mexico’s High Tech center.

It is also the 3rd largest city in Mexico. Monterey is laid out like many American cities, with widespread suburbs surrounding the main metropolitan area. 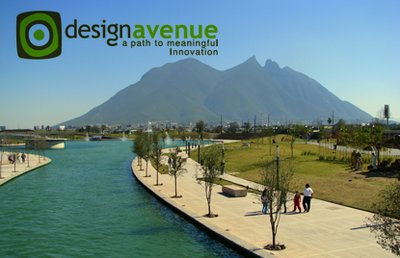 The city sits at the foot of the Sierra Madre mountains, in a 1,800-foot-high valley. The city sits in the shadow of the uniquely shaped 5’700-foot mountain peak called “Cerro de la Silla,” or Saddle Hill.

Monterey has a massive 6 block “square,” that forms its city center, which is called the Macroplaza. The Macroplaza is home to many of the important city buildings such as city hall, the post office, museums, theatres, and the cities’ cathedral. The city has put lots of work into it’s preservation of culture. There are plenty of museums of art, history, science, and even a Planetarium.

If Monterey itself isn’t your cup of tea, there’s plenty of activities outside of the city. You can go take a gondola up Friar’s Mountain, and then traverse the Garcia Caves. The Cascada Cola de Caballo, Horse Tail Falls, is also just outside the city.

The most popular destination outside of Monterey is Chipinique National Park. The park has a plethora of hike and bike trails that are nestled among beautiful groves of trees. You can even stay overnight in the park at the Chipinique Hotel.

Monterey is a high tech city with a good sense of history and culture. 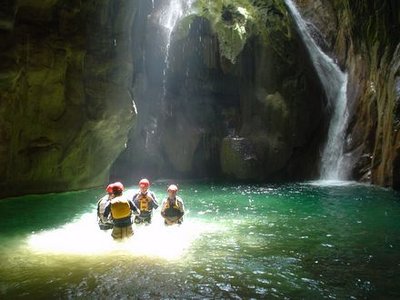 The canyoning experience known as Matacanes take place in a small village called Potrero Redondo in the Santiago sierras, very near the city of Monterrey, Nuevo Leon MEXICO. The time that will take this incredible experience is in about 10 hours, and you'll find two rappels of 27 and 18 meters, two underground rivers where you will cross the mountains, more than 25 jumps to the water from 1 to 12 meters high, natural slides, and much more natural obstacles.

I want everybody to live the wonders of Nuevo Leon, and this places is what i offer! 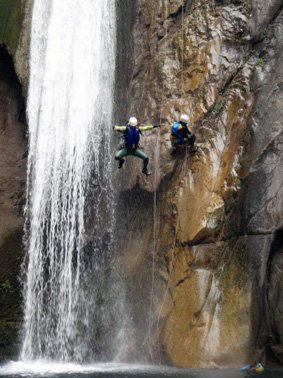 Season
Begin March 21st and it approximately ends on September 15th, depending on the rains and hurricanes. It can be suspended at any time according to river level. The river safety level is monitored daily by inhabitants of Potrero Redondo, Las Adjuntas and the State authorities.

Intermediate: this route is apt for people with little experience in hiking, the route involves walking in paths, between stones and can have down climbing. Although this can be your first adventure trip is necessary that you have the ability to move mountain terrain. All our routes includes rappel course. GOOD phisycal condition is required.. 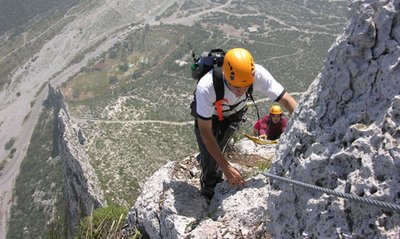 A via ferrata (Italian for "road with irons") is a mountain route equipped with fixed cables, stemples, ladders and bridges and which are accessible to people with a wide range of climbing abilities. Whilst the easiest routes are relatively straightforward, more challenging routes are best climbed with a guide to avoid mistakes in handling the safety gear. The confidence of knowing the safety issue is taken care of leaves you to enjoy the stunning scenery and high level walkways.
A head for heights is an absolute must as some stretches of via ferrate can be very exposed but with a guide these are conquered in perfect safety. If you've ever considered or enjoyed scrambling over rocks or tackling an adventure course a Via Ferrata would be the perfect holiday activity. In the same way an adventure course has both a physical and mental component a via ferrata will be as much a test of your adaptability as it is fun and exhilarating!

This was just a little bit of Monterrey...So if u want to travel to a wonderful place and want a free guide hahahahahha just send me a message to know us and plan something fun =)

This blog requires you to be a logged in member of Travellerspoint to place comments.

If you aren't a member of Travellerspoint yet, you can join for free.